Despite the NDA the Evocati are under, there is already some leaked Star Citizen 3.0 content available. If you hate spoilers you should leave this page.

Most videos are probably not leaked on purpose, people forget to set videos to private while submitting bug reports.

Update:videos are down, screenshots are still available.

More video’s and screenshots can be found at /r/scleaks.

Several gorgeous screenshots from the new 3.0 launcher and others, that Avenger hnnng! Click on the images for full resolution or visit Imgur. 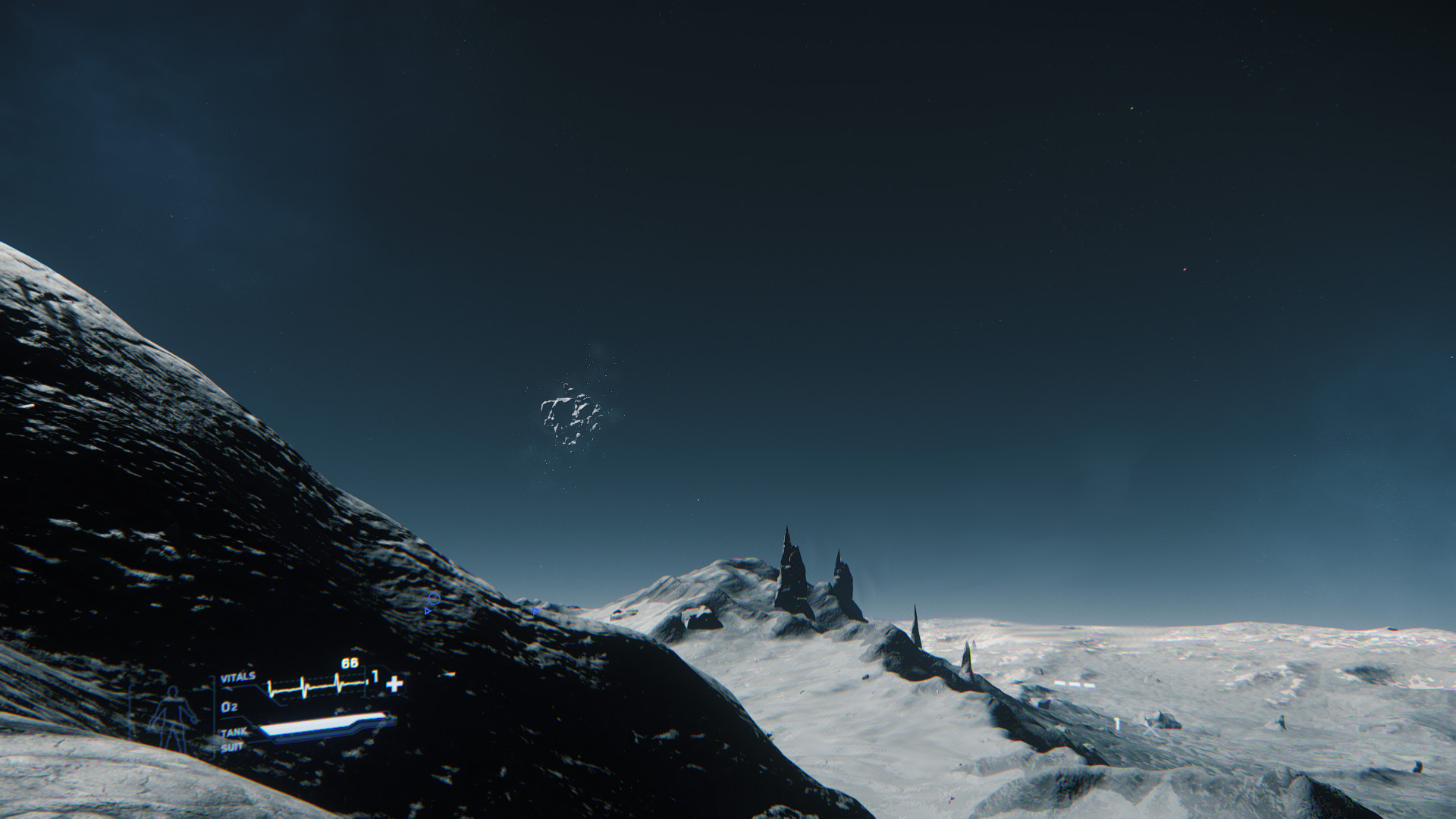 One of the first leaks are the patch notes. I picked some of the highlights and reformatted the text for readability.

Alpha Patch 3.0.0 has been released to the PTU, and is now available for Evocati to test! This is our largest content release to date featuring numerous tech and core system updates, and we’re excited for you to get your hands on it.

You will have access to planetary surfaces for the first time on three moons (Yela, Daymar, and Cellin) along with an asteroid (Delamar). These new surfaces are expansive, with over three million square kilometers to explore, all dotted with surface outposts and derelict ships. Additionally we have added four new ships, our first dedicated ground vehicle (Ursa Explorer), the foundation of our revamped mission system with new missions, a completely new launcher and patcher system, and so much more!

Since we have much to test with many features still being worked on, we will be doing focus waves of testing so we can nail down particular features and systems before moving on to the next.

Your launcher will show “3.0.0” as the client version. It is strongly recommended that players delete their USER folder for the Public client after patching, particularly if you start encountering any odd character graphical issues or crash on loading. The USER folder can be found (in default installations) at C:\Program Files\Roberts Space Industries\StarCitizen\LIVE.

We would like you to focus on the above for this initial wave of testing and bug reports.

NOTE: Other content and features are in and listed in the notes, but currently not the focus of this testing phase as they undergo bug fixes and polish. Additionally, there’s content that is not listed in the notes that are intended for live release and will be added iteratively during the testing cycle.
Key Game-play How Tos:

Show Location: We have added a command that allows you to find your location in coordinates (useful for bug reporting purposes). Enter “/showlocation” in the chat box (make sure you are in a all chat) to get coordinates.

Approach the entry point of your ship, then press and hold “F” to activate the interaction system. Select from the various inner thought prompts using the cursor or mouse wheel to move between them. Once inside your ship, again press and hold “F” and select the “Flight Ready” prompt to run through complete ship start up. Alternatively, you can press the “F5” key for quick start up.

Landing now takes place through an Air Traffic Control (ATC) system. Request a landing with “N” as before and approach the landing area. You will automatically be assigned a specific landing pad (highlighted green with a vertical landing guide line). Proceed to the landing pad, but avoid flying over other landing pads and take-off pathways.

To quantum travel to a destination, open your MobiGlas (F1) and select the StarMap App (diamond shaped symbol). From there, use the mouse to select a destination. Whether or not an object can be selected for QT is determined by gravitational values (The larger the object the further away you can detect it, large objects with small objects in orbit drown out their detection capabilities at long ranges). Meaning you will not be able to travel from point A to B at all times, but instead may need to move into orbit of a larger body to detect destinations also in orbit. For example, to get to a station orbiting a moon that orbits a planet, the route is Planet>Moon>Station. Once you have a destination selected you can “set destination” on your MobiGlas to bring up a quantum travel target. As before, align with the QT target and press “B” to travel. As before, align with the QT target and press “B” to travel.

Oxygen Supply: Many areas, such as space or the moons of Crusader, do not have breathable atmospheres and are dangerous for characters unless they’re wearing a pressure suit. Most pressure suits are equipped standard with an oxygen tank. As you breathe, you will slowly consume the oxygen inside your tank. Your oxygen tank will automatically begin to refill once you are inside an area, station, ship or outpost with a breathable atmosphere. If your oxygen supply runs out, your pressure suit contains a small buffer of oxygen to provide you with a short amount of time to try to find an oxygen supply. If your suit is not sealed or you’re not wearing a helmet, you will not have this buffer. If you do not have any oxygen available, you will asphyxiate and quickly pass out.
Stamina: As you exert more effort by running, jumping, etc., your muscles work harder and begin to consume more oxygen. To keep up with this higher demand, your heart rate and breathing increase to provide your muscles with a steady supply of oxygen. Wearing heavier armor will increase how much effort it takes to do actions and will tire you out sooner. The more you exert yourself, the harder you breathe and the faster your oxygen supply will be depleted.
Heart Rate Monitor: The heart rate monitor on your helmet’s HUD and in your mobiGlas functions as an exertion/stamina meter. As a character exerts themselves, their heart rate increases. If a character exerts themselves too much, they will enter a Hyperventilated state. This will restrict the actions that you can perform, and things like running, sprinting or vaulting will be blocked until you exit the Hyperventilated state. Heart rate and breathing can also effect recoil handling and aim. As your heart rate increases the character’s aim will begin to sway, ranging from a minor wobble to wild drifting. Once levels reach certain critical thresholds your vision will also begin to be effected, slowly dimming till it goes completely black. Once your heart rate returns to normal, so will your vision and movement.

Injury is now taken into account for status effects to a small degree including movement penalties for limb damage.

Holding down the [F] key will activate Interaction Mode – a contextual cursor will appear in the center of the screen, interaction points will be highlighted, even from a distance. The parallax cursor movement allows selection of anything on screen with little head movement, while retaining full input control. Movement is limited to walking speed while in Interaction Mode. Holding the right mouse button enters into ‘focus’; the camera rotates and zooms in on the cursor location, putting it in the center of the screen. From here, the cursor behaves normally. Releasing right click returns to standard view. Left click confirms the selection, and the associated action begins. Releasing [F] will always immediately return to natural gameplay.

Added the foundation of a new “hint system” which will allow players to learn about how to play the game whilst playing it and reduce the burden of having to consult an off-line resource.

Added new command /partylaunch. If the party leader enters /partylaunch into the chat window in game, this will send a notification to each party member when the leader enters an instance that they can either accept or ignore. If accepted they will be put into Matchmaking system to join the leader. If the server doesn’t have enough space for the full party, all players in the party will be put back into Matchmaking to find another server.

We have implemented the first fully procedurally generated, explorable planetary bodies. These include three moons; Yela, Daymar, and Celin, as well as the mining planetoid Delamar. Each planetary body has unique atmospheric composition, pressure, and gravity as well as a variety of surface outposts and derelict ships to explore, many tied to our new missions system.
Levski is a base built into the rock on Delamar, an asteroid hidden deep in an asteroid belt. The base was originally an active mining facility but after being left derelict for a number of years new residents moved in and it became a hotbed for political radicals & criminals. The main areas are controlled by various political groups with a strong anti UEE sentiment, they try to keep order best they can. Levski has the choice of numerous shops spread across multiple floors, many missions will be available (both illegal and legal). You can gain access to Levski by; foot, ship or ground vehicle.

Planetary surfaces are dotted with surface outposts representing a variety organizations and functions. Each outpost is unique and has its own power system and oxygen supply, many with usable Kiosks and landing pads with associated ASOP terminals.

Landing and take off at public facilities is now controled by Air Traffic Ontrol (ATC). The ATC acts as the connection between you and the landing tower using the MFD comm function in every ship. When attempting to land, you will open a communication channel to the tower and ask for permission. The tower then checks if all the requirements are fulfilled and will advise appropriately. Selecting a target location will happen via the MFD Comm System.

We have introduced the basics of subsumption. You should now see NPCs going about their daily lives at all 3 major landing zones (Grim Hex, Port Olisar, and Levski).

Quantum travel (QT) destinations are now selected via the MobiGlas StarMap app.
Whether or not an object can be targeted for QT is determined by the drive’s detection range and is based off gravitational values (The larger the object the further away you can detect it, large objects with small objects in orbit drown out their detection capabilities at long ranges). Meaning you will not be able to travel from point A to B at all times, but instead may need to move into orbit of a larger body to detect destinations also in orbit. For example, to get to a station orbiting a moon that orbits a planet, the route is Planet>Moon>Station.
There’s now a short range quantum travel for moving around different orbital points of moons and small planetary bodies.
Quantum travel speeds, spooling and cooldown times are variable based on the size and quality of the drive.

Doors and airlocks have been updated with additional functionality.

First introduction of item 2.0 system for ships, including the following:

Introducing the first implementation of cargo!

New to the game? Basic information to get you flight ready! Explore the Starter Guide.