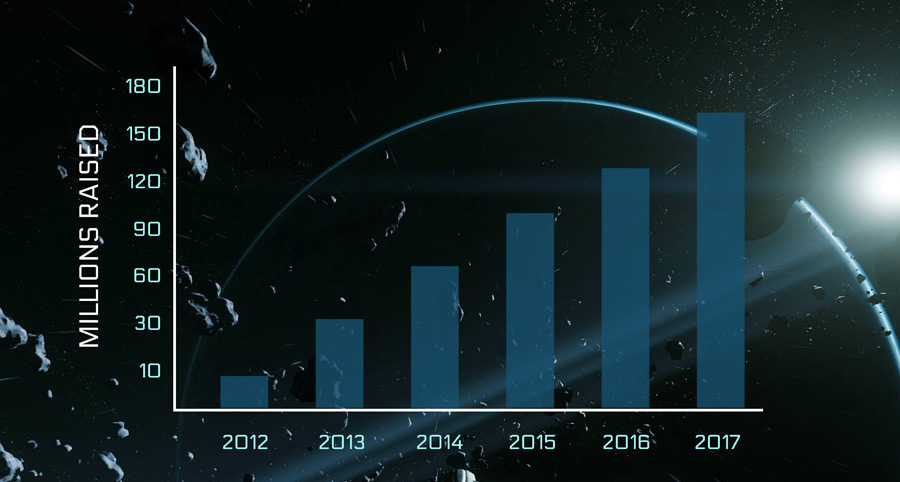 This content is out of dat. Star citizen raised over 400 million and it’s a buggy mess. Is it a ponzi scheme?
Star citizen funding seems unstoppable and surpassed $175 million in 2017. How on earth did this video game which is still in Alpha raise so much money? First, let’s have a look at how it all started and some of the controversies surrounding this game.

Star Citizen is a scam, vaporware, a glorified tech demo. There’s almost no content and it’s been in development for years now. I bet the founder runs off to some tropical destination and blows all the money on hookers and blackjack while buying cryptocurrencies at Binance! Well no.

If Star Citizen truly is a scam, they’re doing a good job. About 5 offices spread around the globe, over 400 employees and actual Alpha gameplay (which is not for everyone). CIG  started out with just a couple of employees in 2012 and scaled up to about 400 to this date. So those 400 employees need to feed their families right? Fortunately, funding also scaled up.

Over 35k backers raised $2,134,374 on Kickstarter in just a few days. After that funding continued on the Star Citizen website. At the end of the initial campaign, a total of $6,238,563 was raised, enough to start development. Star Citizen’s crowdfunding didn’t end here. CIG decided to continue funding on their own website.

The first few days the mass number of visitors caused the servers to go down. Once they had more capacity funding started to really take off. So how much money did Star Citizen raise? Here are the numbers covering 2012 to 2017.

Basically funding a game this way means no pressure from investors or hard deadlines. This means there are fewer constraints in developing the game. The Star Citizen community is pretty vocal though and their voices are heard, but they can’t pressure deadlines. Backing the game is not the same as investing, the money is used to develop the game and you’re not getting any profit in return. Fortunately, CIG updates the community through comm links and videos and major events like Citizencon and Gamescom.

Why Star Citizen took off initially

So Chris Roberts is kind of a big deal to many older gamers. Once his Hollywood adventure ended, he announced Star Citizen. Fans of Privateer and the Wing Commander series jumped the opportunity to back the best damn space game ever (BDSE). You see, he made some great games back in the day and now that his fans are older their disposable income increased. A couple of years ago the average backer put over $100 in the project, but don’t quote me on that as I can’t find the source anymore. The majority of the backers just have the starter packages so this means there is a large group who throw their wallets at Star Citizen.

Which was to be expected, it lasted over 11 months before patch 3.0 was finally released. The lack of updates might have brought in fewer backers, but 1.1 million less than 2016 isn’t that big of a deal. It almost looked like funding was slowing down, but that was before the anniversary sales. The anniversary sale always brings in millions of cash and is one of the funding highlights of the year. Once CIG releases a vertical slice of squadron 42 funding will probably surge again. Will it be enough to keep developing the game into 2018? I don’t know the company has highly talented people in control of the money flow and I don’t have insight into how they run finance. I’ll leave it to the experts.

The money train isn’t stopping. Although before December 2017 funding seemed to slow down, the anniversary sale made up for it. This might be because there hasn’t been a patch update for about a year and people are hungry for updates. With Star Citizen 3.1 on the rise, there might be a huge spike in funding (if they manage to bring in some new game mechanics.

Who cares about funding, it’s not a big deal

Funding is what keeps development going. I agree that there are many articles out there that solely focus on funding. Guess what, this is something never seen before, it’s unique, one of a kind, and it turned out to be an elaborate ruse, the star citizen referral code should have been a wake up call.

Star Citizen is currently being developed by Cloud Imperium games under the guidance of founder Chris Roberts. Roberts is known for the famous Wing commander games and Privateer. After gaming, he spent some time in Hollywood making movies. Star Citizen is a first-person MMO with hundreds of solar systems once released. The game features incredibly detailed spaceships varying from small single-seaters to huge multi-crew starships capable of carrying fighter ships. The beta will have massive space stations, planetary outposts, FPS action, land vehicles, exploration opportunities, mining, trading combat and a Death Star, wait…no.

Star Citizen is in early Alpha

At this moment the game is in alpha and more or less playable, update: 4 years later and it’s still a f*king mess. Content is thin but enjoyable for a couple of hours, the fidelity is entertaining enough. This should change once version 3.1 arrives and more game mechanics are rolled out. You may encounter many bugs, glitches and performance issues,  even if you own a rig from outer space. If you’re lucky and don’t experience performance issues all the time, you’ll get a feeling of the game’s potential.

There is much controversy surrounding SC and some are justified. Mainly because of the ridiculous prices for some of the game packages and numerous delays. You’re not supposed to buy those expensive packages, they’re only to support the game. A starter pack is about $60 which is a bargain for 2 triple-A games, pricing will increase soon though. Delays are what most think of whenever the game is mentioned, which is fair. Chris Roberts was too optimistic about the release date of the game and shouldn’t have announced unrealistic deadlines. Many accused him of lying to boost the hype. To be fair, what they are doing is unique and innovation is time-consuming. You fail until you get it right. Game development isn’t easy, especially when you look at the scale of the project BUT THEY HAD OVER 10 YEARS and delivered nothing!.

New to the game? Basic information to get you flight ready! Explore the Starter Guide.